I love German food.  By German food I mean, of course, schnitzel, bratwurst, spätzle and apple struedel.  The pretzels and other breads are also quite fantastic. Yes, I know there’s more than that, but when I think of German food that’s still what I think of.  There’s a Schwabian dish in this area called maultaschen that some people love, but I’m not a big fan.  It’s kind of like ravioli in the sense that it’s pasta filled with meat and other things, but I find the pasta a little too thick and rubbery for my taste.

I could do an entire post on restaurants, and maybe I will after I’ve been here a little longer, but this post is mostly about the food in grocery stores and the shopping experience.  As most of you know, the food here does not have as many preservatives as that found in the States.  Also, the typical refrigerator here is quite small, which I assume is because you can’t store a lot of food anyway since it goes bad more quickly.  That would also be the reason Europeans tend to shop more often in smaller amounts rather than make a grand Sam’s Club trip to stock up for a potential Armageddon.  (Then again, it’s possible they don’t need preservatives because the refrigerators are small…)  Making smaller, more frequent shopping trips works for me personally since I don’t have a car, so everything I buy I must carry home which involves walking from the train to my house at a minimum.  Although I considered myself the Queen of One Trip when unloading a car, that was in the old days with a short walk to the house; now I don’t want to have to stop and rest because my arms hurt.  I find myself buying very few drinks and other things simply because they’re “too heavy” (not worth the pain of carrying).  Wine is an exception – I mean, c’mon, I’m not a Neanderthal.

The most obvious difference here is that milk is stored in cartons on the shelf and not refrigerated until opened.  I know, I know, it seems to contradict the part about fewer preservatives.  Eggs also aren’t refrigerated, although I did find an article that explains why:

Why The U.S. Chills Its Eggs And Most Of The World Doesn’t

I know they have the metric system here, but I’m a little surprised it also applies to eggs which I can’t seem to find by the dozen (except on the U.S. posts).  They’re sold by 6 or 10.  The eggs have much brighter orange/yellow yolks, and the shells often come complete with bird shit.

Most of my friends seem to prefer brown or spicy mustard, but I grew up in Minnesota and I’m still a fan of good old fashioned yellow mustard.  I found it interesting that here it’s called “American mustard.”  They also have other condiments with “American” in the name, which I find amusing since I have no idea what they. 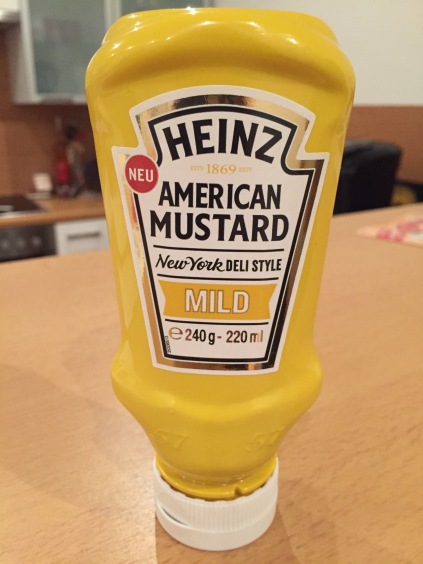 I just call this “mustard”.

I’m not sure what this is…

Some condiments that we’re familiar with come in quite a different form – like mayonnaise in a tube (yes, like toothpaste).  I have discovered a delicious new condiment called Curry Kechup however – generally used with bratwurst to make currywurst, but I plan to search for other creative uses since it’s quite yummy.

Finally, I discovered this next “condiment” the hard way – when I ordered a pepperoni

pizza.  I remember being confused on the phone (can’t recall the details now), and thought  they’d made a mistake when they delivered the pizza with no meat. Then I saw this in a store and it was like a light bulb went off over my head – oh, THAT’S why they put peppercini on my pizza.

Fresh Produce and the Market

I discovered a wonderful haven called the Markthalle in downtown Stuttgart.  There are other farmer’s markets that offer delicious fresh foods, but the Markthalle is indoors for comfortable shopping (and even wine drinking) on even the coldest days.  The prices vary from very cheap breads to expensive cheeses and handmade items.

At a grocery store I found a new fruit that are like baby kiwis the size of strawberries – why don’t we have these in the U.S.?   My final anecdote in this section is more about my not quite understanding the metric system.  The sign had the cherries were priced by 100 grams, so you can see how much I bought in the picture…. for about 17 euros.  Yikes.

Let’s face it, some of these are just funny names or pictures of things I find odd.  Probably after I’ve lived here a few years, I won’t find them funny… but for now I’ll giggle like a little kid.  Roll over the pictures for a description or comment. 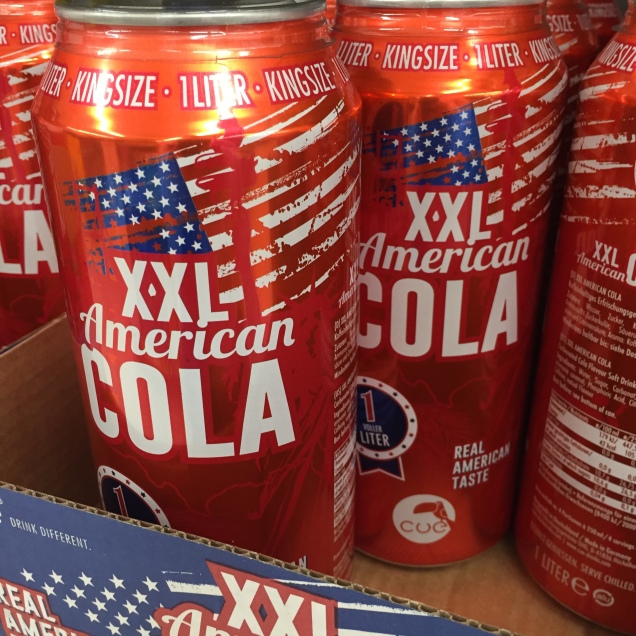 A clue as to what they think of us

I thought the Green Fairy was absinthe 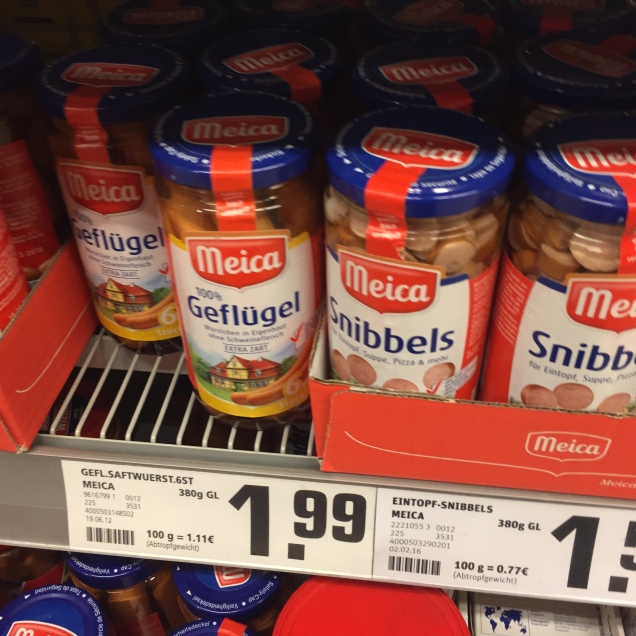 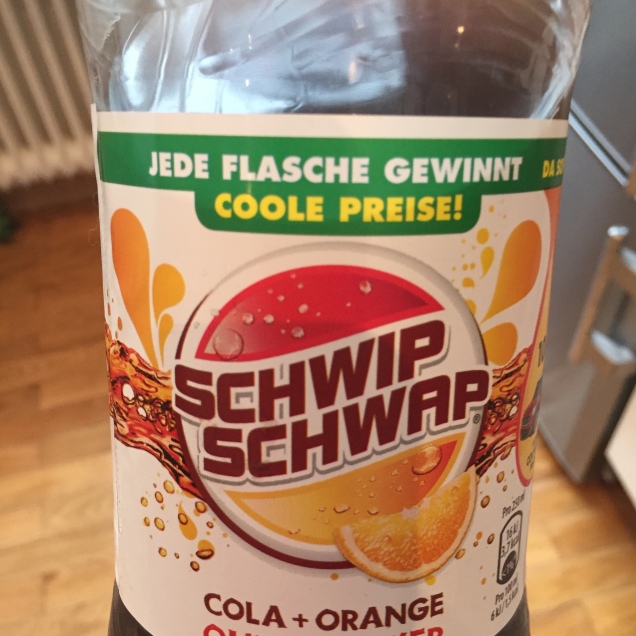 More commonly called Mezzo Mix, this is a mix of cola and orange pop. 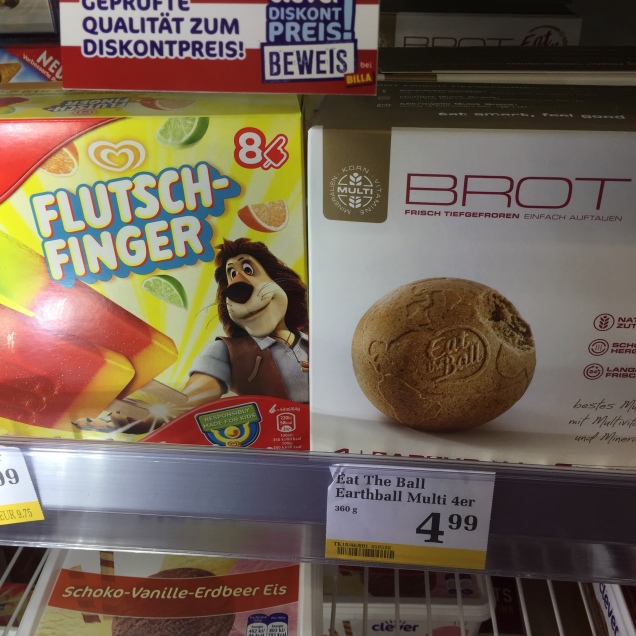 In the freezer section 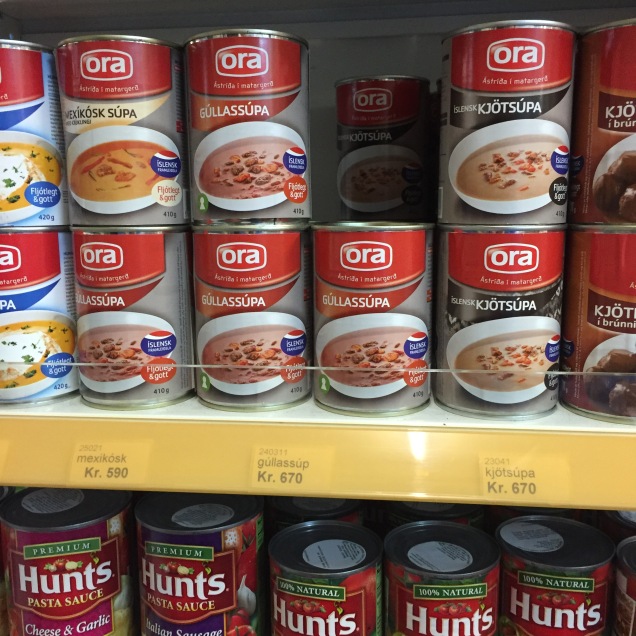 This was actually taken in Iceland