I got an apartment!

I selected an apartment!  It ended up being the first one I looked at, and I couldn’t be happier!  The neighborhood is beautiful, and it’s in a great location near downtown, but the best part is that I have the entire first floor all to myself!  After years of living in suburbs, this will be my first time trying city living with commuting by train and bus.

This apartment has tons of space, about 2,000 sq ft (190 sq m) and gives me with plenty of room for friends who decide to come visit.  Now that I have two extra bedrooms, my hometown girlfriends won’t have to sleep on an inflatable mattress at the end of my bed.  (Although, we may do that anyway because that was fun!)

Walking through the front door, a mosaic granite floor stretches down the hallway towards the kitchen and large, open living room at the far end.  Doors align the walls on both sides, and the rooms on the left side are also connected to each other by interior doors.  The master bedroom is the first door on the left with a door on the side wall that connects to the first guest bedroom.  The door on the far wall of the second room connects to the large living room area, opening up the space but with the ability to close the doors for privacy when needed. 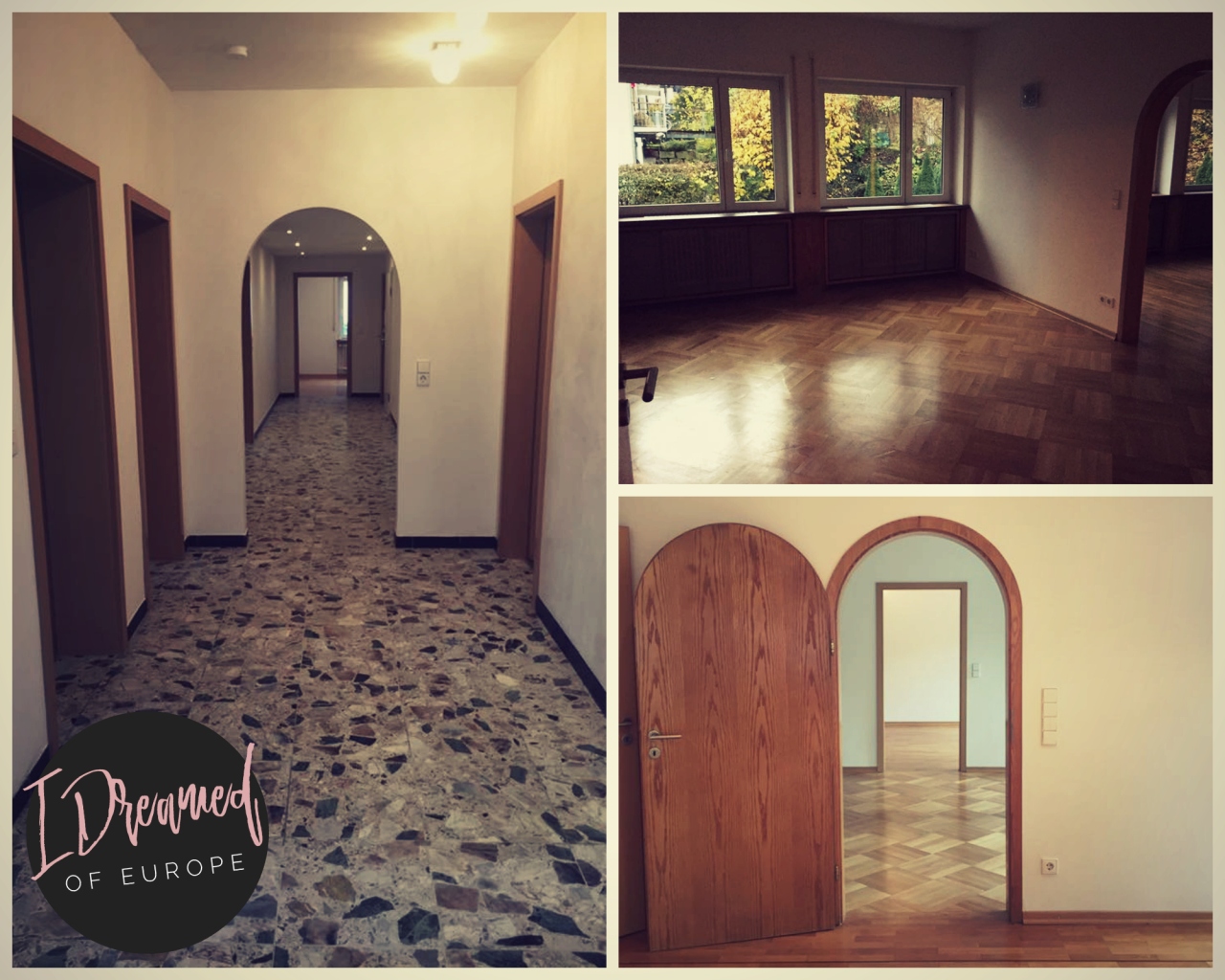 The first door on the right opens up the master bathroom, and it really is heaven!  A large tub sits alone in the corner, against the far wall is the stand alone shower, and a separate door on the other side opens to the toilet in it’s own room.  On the same wall as the main door, across from the shower, are two side-by-side sinks beneath two large mirrors.  Although there’s no counter that connects them, there’s plenty of storage space, I just need to find some shelves or drawers to put there. When I first looked at the apartment all the windows in the bathroom were clear glass, but fortunately the landlord installed frosted glass for me before I moved in.

The other doors on the right lead to the third tiny bedroom, the shared stairwell, and the half bathroom that has a urinal I may turn into a planter while I’m living here.  The final door opens into the kitchen which is small by American standards but pretty large by German.  I do have a dishwasher that not all European apartments have, but no garbage disposal.  The cabinets contain quite a bit of hidden storage space, and the sink came with a spider that I had the movers squish for me.  I’m not proud.

But my favorite room is the living room.  Every room except for the bathrooms and main hallway has hardwood flooring, and in the expansive space of the living room, it feels more like a ballroom.  I can definitely imagine doing some dancing here, and possibly sliding in socks Tom Cruise style.  One wall is tiled with gorgeous stone, and a small oil-burning fireplace (mostly for ambiance, not heat) is set out in it’s own walled-in space.  The opposite wall is lined with windows with radiators beneath them, and I love the view toward the garden. 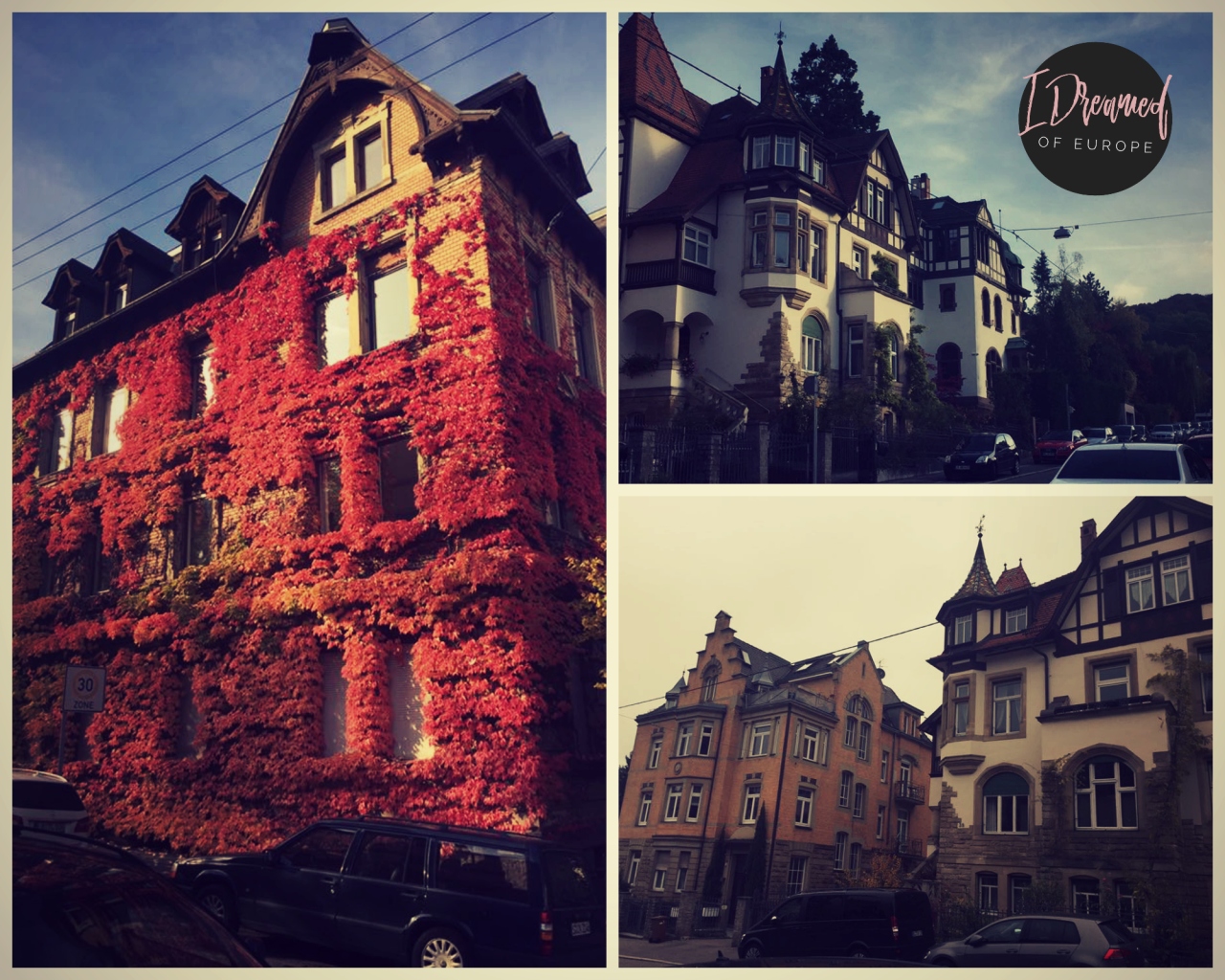 The neighborhood is great, but, of course, I would end up next door to a kindergarten.  That’s really not a big deal though, especially since I’m at work most weekdays.  The buildings have that old German charm to them, and the sharp incline of the hill reminds me of San Francisco. One strange thing is that for all the square footage (or square meters, if you prefer) there is very little storage space because there is not a single closet.  I have a garden and a parking spot for when I finally get a car, and there’s storage space in the basement, although it’s a little scary.  All in all, I’m pleased with my choice of apartments.  It’s just the beginning of where I hope to build some lasting memories.